We love this!!! Therapy dogs can bring so much peace and calm to any situation. The unconditional love of an animal has worked wonders for many. We have great groups here in Connecticut who do this too! 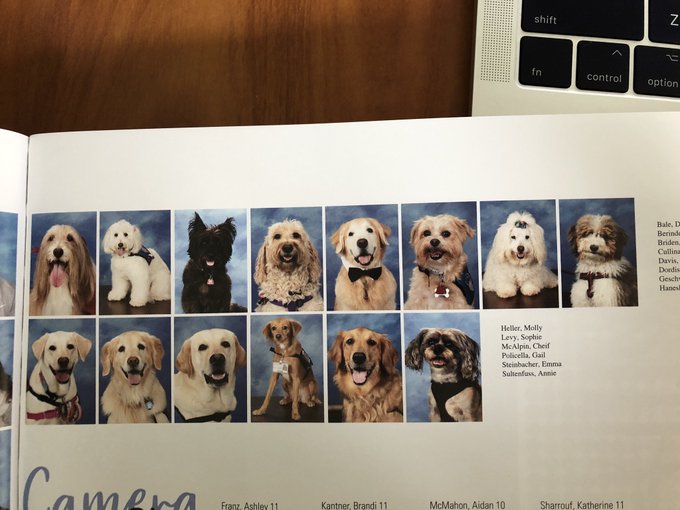 We’ve included these cuties in the yearbook

The yearbook staff at Marjory Stoneman Douglas High School have devoted a page to some of their furry friends that have kept students and staff company following last year's mass shooting.

All fourteen therapy dogs on campus got dressed up in their best collars, ran a comb through their shaggy fur, and flashed their canine smiles for the yearbook staff's camera. The photos appeared in the school's yearbook, called Aerie. The yearbook staff tweeted a photo of the therapy dog page, which has been making the rounds on social media.

"The kids love having the dogs on campus, and honestly, do so we," yearbook adviserSarah Lerner told CNN.

The idea to give the therapy dogs their own page in the yearbook came about after one of the pups got his photo taken on school picture day. Lerner liked the idea and began discussing with her editors how to do it for all the dogs on campus. On make-up picture day, the gathered all the therapy dogs and snapped a few photos for the dedication page.

"I told one of their handlers about it and next thing I know I had 15 dogs in the room," she toldBuzzFeed News."We sat them up on chairs, they were smiling for the camera. It was the greatest day of my life."

The dogs were introduced on campus last year after 17 people were killed in a mass shooting on Valentine's Day, 2018. The school's first therapy dog, a 3-month-old female Bernese mountain dog-poodle mix named River, arrived on campus in July last year. The dog was adopted by Diana Haneski, a library media specialist at the high school at the time.

A second tweet sent by the yearbook staff showed one of the therapy dogs, Chief, posing next to his photo:

We love that Chief loves his yearbook! Make sure to find him to sign it. ❤️pic.twitter.com/JHw0gjtptH

Many of the trained therapy dogs were brought to campus by volunteer handlers from a variety of canine organizations. The pups are never a distraction for students, Lerner said, adding that the pups are always on a leash and well-behaved.

Including the therapy/service dogs in the yearbook is the best decision we’ve made so far like this one dog had a bowtie and my heart 😭💗💕pic.twitter.com/ecP9X01wqD